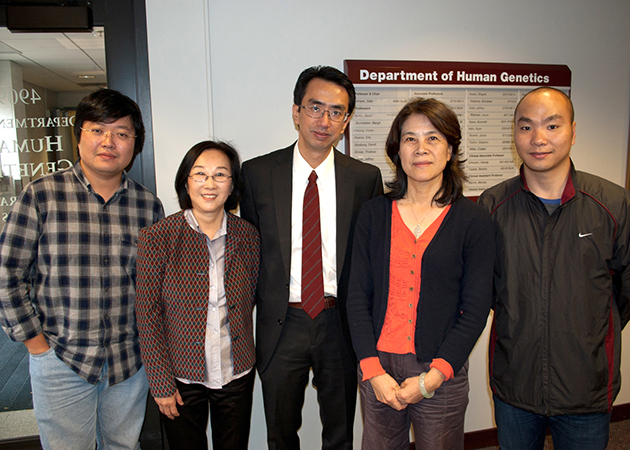 Jun Li once studied the entire world’s population by comparing the genomes of nearly 1,000 people from around the globe.

His more recent work with partners at Peking University Health & Science Center (PUHSC) takes that very macro approach and applies it on a much smaller scale. He compares DNA not among people on different continents, but among different areas of the same tumor.

“So much of biomedicine is about using technology to measure fairly complex systems,” said Li, PhD, Associate Chair for Research in the Department of Computational Medicine and Bioinformatics. “Just like people compete for resources and deal with geography – oceans and mountains – cancer cells do, too. The concept is highly transferable.”

Li’s Joint Institute collaboration with PUHSC Oncology Professor Yang Ke, MD began two years ago. By comparing the DNA taken from different sectors of the same tumor (as well as the surrounding normal tissue and nearby lymph nodes), they hope to make inferences about how a patient’s cancer developed over time.

“In studying different areas of the same tumor, we can appreciate which mutations probably happened early and which happened late. Those early mutations are shared broadly across the different tumor regions,” Li said. “Such molecular stories are potentially useful for clinical management.”

Their research focuses specifically on esophageal squamous cell carcinoma (ESCC), an especially aggressive type of esophageal cancer which is unusually prevalent across parts of northern China. The researchers obtained more than a dozen individual tumors, dissected each into as many as ten sections, and sequenced the samples for comparison.

The collection and sequencing work was performed at PUHSC, and the resulting data were sent (via multiple hard drives!) to Li’s lab at the University of Michigan Medical School for analysis. Li’s team is able to make Darwinian evolution tree models – not of different life forms on Earth, as the famous naturalist did, but of different regions of a tumor.

“If you know more about the essential pattern of mutations, you can know what kind of cells are more likely to be at the trunk of the tree and which are likely to be out on the branches. Such information is essential to coming up with a good battle plan,” Li said. “Sometimes the best strategy is not simply to kill as many cancer cells as you can. Long-term management using Darwinian theory as a guide may be a better route.”

The project has already produced one publication – the partners helped to identify a rare sub-type of ESCC – and a second paper describing the primary study outcomes is expected later this year. The study is a unique blend of classic scientific theory, modern medicine and cutting-edge computer science, and it wouldn’t have been possible without the kind of collaboration supported by the Joint Institute.

“As we develop in our respective fields, the training we receive is highly compartmentalized,” Li said. “I’m a biostatistician. It would be hard to retrain myself to be doctor. But together, our collective knowledge can advance science.”